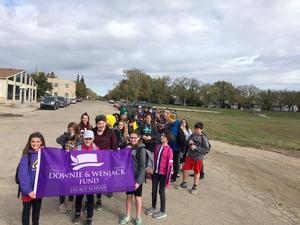 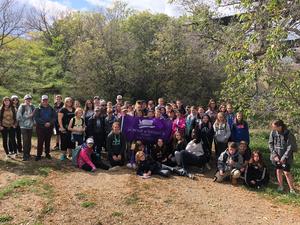 Grade 6, 7, and 8 students collectively walked 600 kms (10 km per student) in support of the Gord Downie & Chanie Wenjack Fund. While on this walk they also did science activities with Mme. Lind and a reflection with Mme. Gagnon.

Chanie Wenjack, misnamed Charlie Wenjack by his teachers, was an Anishinaabe boy born in Ogoki Post on the Marten Falls Reserve on January 19th, 1954. Chanie’s story, tragically, is like so many stories of Indigenous children in this country; he fell victim to Canada’s colonization of Indigenous Peoples.

In 1963, at the age of nine, Chanie was sent to the Cecilia Jeffrey Indian Residential school in Kenora, Ontario. In 1966, at 12-years old, Chanie ran away from Cecilia Jeffrey, attempting to reunite with his family 600 kilometers away in Ogoki Post. Nine others ran away that same day, all but Chanie were caught within 24 hours.

Chanie’s body was found beside the railway tracks on October 22, 1966, a week after he fled. He succumbed to starvation and exposure. In his pocket was nothing but a little glass jar with seven wooden matches.

Inspired by Chanie’s story and Gord’s call to build a better Canada, the Gord Downie & Chanie Wenjack Fund aims to build cultural understanding and create a path toward reconciliation between Indigenous and non-Indigenous peoples.