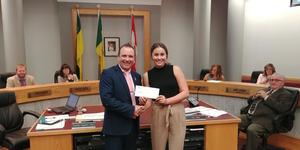 Jenna was presented with the scholarship by Moose Jaw Mayor Fraser Tolmie who referred to  Meili as “an excellent example of a hardworking student.”

Meili graduated in June with a 96.3 per cent average and has been actively involved in her school and the community.

In addition to playing on numerous sports teams while maintaining good grades, Meili volunteered with the Riverside Mission and helped create the Sets for Supper fundraiser.  She has also served on the City of Moose Jaw’s Youth Council and was part of the Duke of Edinburgh’s International Award’s Program.

Meili is enrolled at the University of Regina in the Faculty of Arts.

Every year since 1982, a scholarship has been awarded to a Moose Jaw student who is attending post-secondary school. The scholarship money is funded through the trust of Boris Dubinsky. Each year’s recipient is chosen by the directors of the Prairie South School Division and the Holy Trinity Catholic School Division.